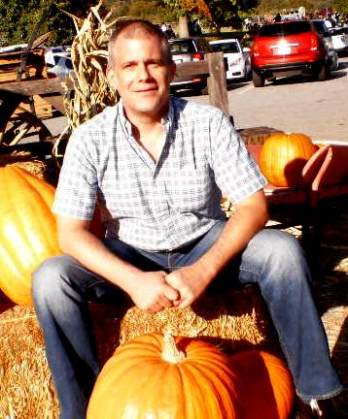 So this is me, in a photograph taken yesterday by my brother as we were both celebrating our birthdays to come in Oak Glen, California. I turn 44 years old tomorrow. My brother turns 41 on the 22nd. I don’t look like a guy who has spent the past year fighting cancer, do I?

On September 10th they biopsied several areas where I had cancer. The pathology results came back negative for cancer, meaning that I don’t have it in those places anymore. Further tests to explore me inside and out also confirmed that there is no apparent cancer present at this time. Five chemotherapy treatments and things seem to have been cleared up for now.

So in that sense, the worst part is over. But it isn’t either. Because I still have to do “follow up” chemotherapy to try and make sure the cancer doesn’t come back. I did my first “follow-up” a week ago, and I have to do two more doses, the first week of November and the first week of December. I don’t like chemotherapy, and I’ve had a real easy time of it. I’ve kept my weight on (I’m a healthy 164 now and never dropped below 158 during this whole process). I haven’t lost any hair in obvious places but did lose a small amount on my legs that no one but an obsessive me would notice. I still think that I lost some of my lower eyelid eyelashes but I never counted them so I can’t be sure. And the top ones seem to be all there. But did I mention that I don’t like chemotherapy even though I’ve had an easy time of it? It just tires me out. Really tires me out. For days that drag on into a week and then two. But then I feel good again with lots of normal “Tim” energy that I try not to spend  dreading the fact that I know I’m going to have to go down chemotherapy road again. As Charlie Brown says, “Uggghh…”

But who’s complaining. It’s kept me alive. I gotta keep going. And I’ll have energy for Thanksgiving and Christmas and maybe 2014 will be cancer AND chemotherapy free.

Thanks for the prayers, well wishes, love, support, listening, encouraging. I swear that medicine worked more than the chemicals they pump into me at the Cancer Center. But I need the chemicals too. So here’s to two more treatments, and the beautiful fact that I’m alive to celebrate another birthday. What a joy it is to be alive. What a joy it was to celebrate that fact with my family yesterday in a beautiful place where they grow apples and pumpkins and sell fresh pressed cider and candied apples and apple and pumpkin pies.

Oh. And I almost forgot. My mom and dad gave me the best birthday present. The piano that I grew up with and learned to play on. They gave it to me!  It’s being delivered to my place so that I can play it again every day as I did when I was a child and young man.  I owned another piano in Los Angeles, but sold it when I moved to the Coachella Valley in 2012. I haven’t had anything to play in almost two years. And this isn’t just any old piano. It’s MY old piano. It helped raise me.

Thanks mom and dad for the keys – to life, and the black and white ones. You’re the best and I love you much. Besides being alive, this is the best birthday present ever. 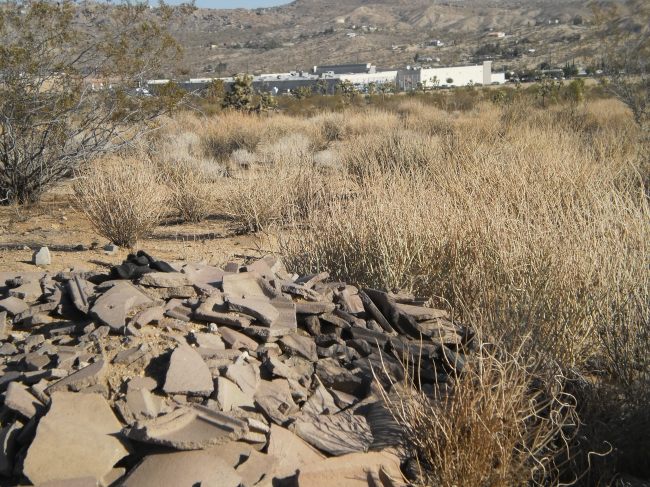 We have two dumps in the area, which are run by the county and city respectively and both charge fees for dropping junk off at the landfill. In the Morongo Valley (the larger region of the hi-desert that Joshua Tree is a part of) many people avoid paying these fees by just driving a few miles down a dirt road and dumping their unwanted refuse in the middle of the desert.

Take a look at the photo above. Those are roofing tiles that were obviously refuse from some construction site. And whoever didn’t want them thought they would do just fine down a dirt road just a few miles from my place.

I could lament the further decline of western civilization, but instead I go out hunting for trash that needs a second chance with the hope of giving it one at Second Chance Homestead. I’ve been loading these tiles into my truck, taking them home and breaking them into much smaller pieces with a hammer (I can work out a lot of anger with a hammer and both my arms are getting a workout as I take turns pounding). I’m going to use the small pieces which have a lovely color and texture as ground-cover on my property. I’ll post a pic when the project is done.

Further signs of the decline of western civilization: look off in the distance in the photograph. That huge monstrosity of a building? It’s the new Super-Walmart that is opening July 17th.  I expect several local family owned retailers to be put out of business over the next year as Super-Walmart becomes the “vendor of choice” for people who value low-prices and convenience over EVERYTHING else.

Did you know that Walmart workers are attempting to organize and striking at Walmart stores across the country? There is a movement of Walmart workers building. They are asking for three simple things: Full-time hours, benefits, and a minimum salary of $25,000 per year for that full-time work. Walmart is notorious for keeping people’s hours at part-time levels so they don’t have to include benefits in their compensation. And working part-time, many of their workers live below the poverty line. Yes. Seriously. That’s how those prices get so, so low.

If you’d be interested in signing a petition in support of these workers please click on the link that follows and sign a petition to show your support. Representative workers are heading from across the country to Arkansas to deliver the petition to Walmart execs at the annual shareholders meeting this June 7th. Add your voice to their plea at http://action.changewalmart.org/page/s/stand-with-strikers?source=20130530_rfr_em_2

WHAT I WRITE ABOUT: